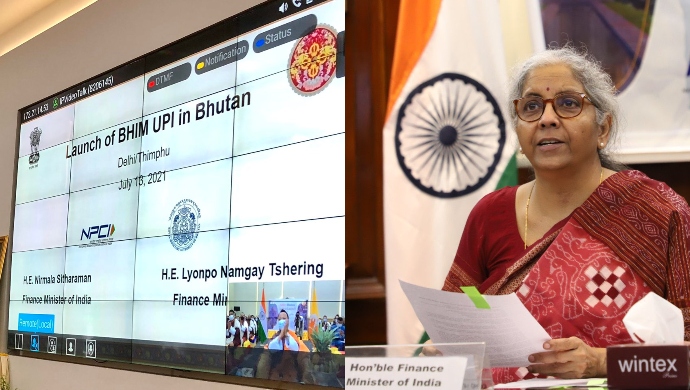 For better reciprocal relations between the countries, it is necessary for the said nations to adapt according to the changing norms. A great example of this was seen recently, as Bhutan became the first country to adopt India’s UPI aka Unified Payments Interface standards for its QR codes. Due to COVID-19, a physical function was not possible. Thus, in a virtual function, finance Minister Nirmala Sitharaman and his Bhutanese counterpart, Lyonpo Namge Tshering jointly launched BHIM-UPI in Bhutan.

Speaking on the occasion, FM sitharaman He said that it is an honor for him to start this service in Bhutan. Sitharaman said, “There could not have been a better place to launch this as every Indian tourist visiting Bhutan goes to the land of happiness with such warmth.” He also acknowledged the fact that Bhutan was the first country to measure the happiness of its citizens, thus “setting an example for the whole world”.

Official Spokesperson of Ministry of External Affairs, Arindam Bagchi shared a tweet announcing the launch, which read, “Finance Minister Nirmala Sitharaman jointly launched BHIM-UPI in Bhutan today with Finance Minister of Bhutan Lyonpo Namgye Tshering . This complements the commitment made during PM Narendra Modi’s visit to Bhutan in 2019. He also spoke about how this launch will enable the payment infrastructure of both the countries to seamlessly connect.

With the launch of BHIM-UPI in Bhutan, the payment infrastructure of both the countries are seamlessly linked.

Bhutan is the first country in our immediate neighborhood to have adopted mobile based payments through BHIM App. pic.twitter.com/GpwcDzc7dS

For more news and updates, stay tuned with us Nixatube.