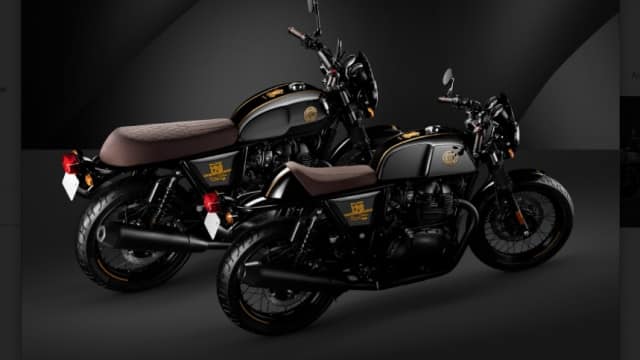 Royal Enfield has completed 120 years. On this occasion, the company unveiled the 120th anniversary edition of its popular 650 twin motorcycles – the Interceptor 650 and the Continental GT 650. This bike has been introduced at EICMA 2021 (Milan Motorcycle Show). What is special is that this limited edition bike will have only 480 units, which will be sold in India, Europe, America and South-East Asia. This means that a total of 120 units of both the bikes can be purchased in India.

What’s special about Anniversary Edition?
To make the 120th Anniversary Edition special, the bike has been designed and handcrafted by the company’s UK and Indian team. This bike has a unique, rich black chrome tank. The tank has been developed at Royal Enfield’s manufacturing plant in Chennai. With the tank, for the first time, both bike parts are completely black and the engine, silencer and other elements are black.

The motorcycle also has accessories like flyscreen, engine guard, heel guard, touring and bar and mirrors. It also receives handcraft tank badges. To make each motorcycle unique, the tank top badge will also have the unique serial number of the motorcycle. The engine of the Royal Enfield 650 Twin Limited Edition will not be modified. It will get the same 648 cc parallel-twin engine as before, capable of generating 47 Bhp and 52 Nm of peak torque. It has a 6-speed gearbox.

Also read: Battery charging tension over, booking of Made in India scooters at Rs 499

Sales and availability
The twins with the 120th Anniversary Edition in India will be available for purchase on December 6, 2021 from the company’s website. However, this will only be available for sale online for a limited time. Customers wishing to purchase this bike can register by visiting the website from November 24. Details of the sales process will be shared directly to the registered email address.